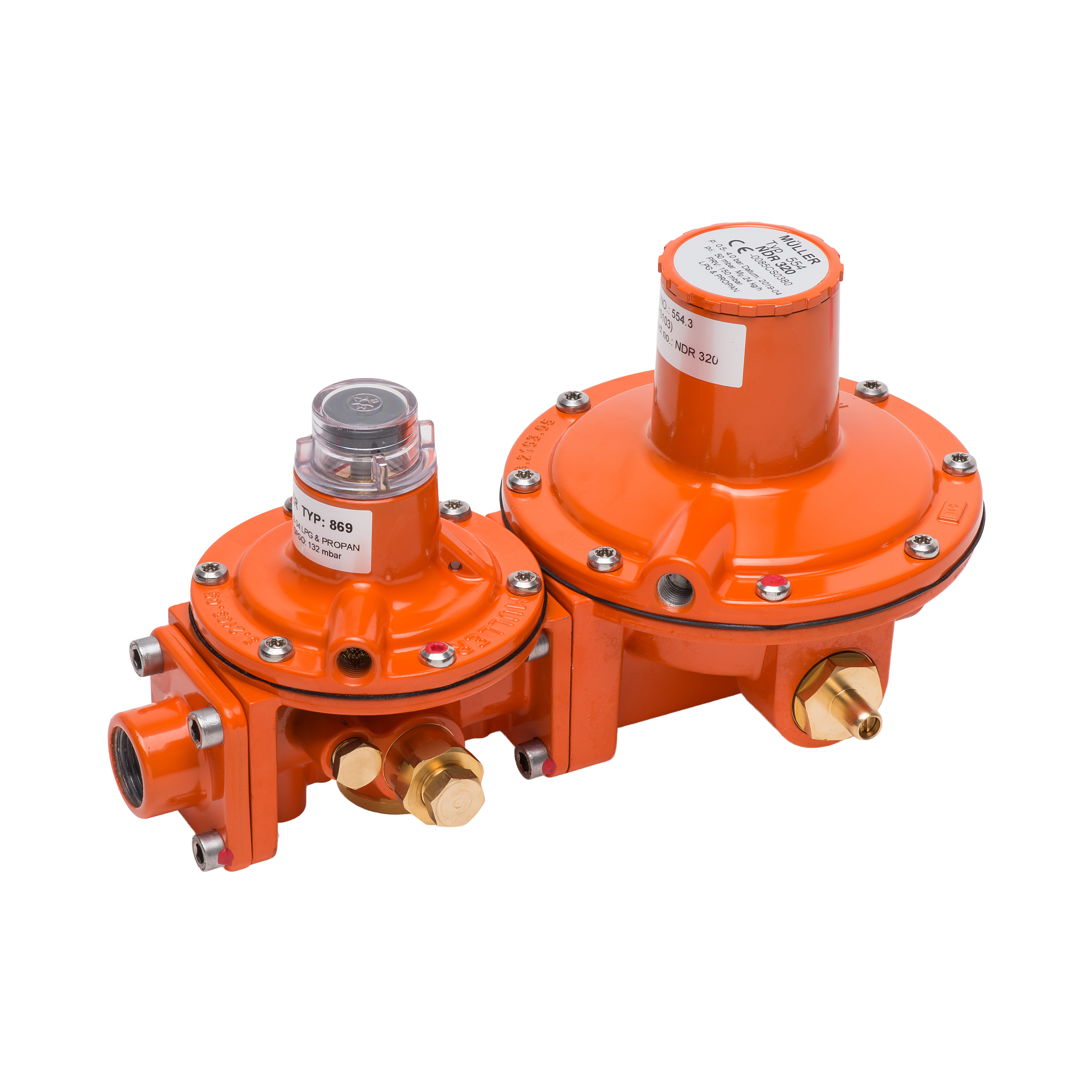 Indoor system “t” – Model 4b DIN 4811 This low-pressure regulator meets the requirements of model 4b “t” if a thermally triggered shut-off element (fuse) is connected upstream.
In this case of application – indoor unit “t” – a blow-off line must be led from the ventilation opening of the low-pressure regulator 320 to the outside.

If there is a further increase in pressure, e.g. due to the OPSO not closing completely, the safety relief valve (PRV) automatically releases a limited amount of the gas flow into the atmosphere after the set response pressure has been reached.

TYPE NDR-320 with OPSO and PRV

A. INDIVIDUAL DESCRIPTIONS
1. Safety shut-off valve (OPSO)
The OPSO is open during normal operation and has the function of automatically shutting off the gas flow as soon as the set response pressure is reached. It must be opened manually after closing.

3. Safety relief valve (SRV)
The SRV is closed during normal operation and has the task of automatically releasing the gas flow as soon as the pressure in the system to be protected exceeds the response pressure. It closes again automatically when the pressure drops below the set pressure.

If there is a further increase in pressure, e.g. due to the OPSO not closing completely, the safety relief valve (PRV) will automatically release a limited amount of the gas flow into the atmosphere after the set response pressure has been reached.

ATTENTION ! All activities described in points C, D and E may only be carried out by authorised specialist personnel.

C. ASSEMBLY
1. Outdoor installation “f”
In this case, the pressure regulator is installed on the building in front of the house inlet in a house connection box.

2. Indoor installation “t”
If the pressure regulator is installed inside the building, a thermally triggered shut-off device (fuse) must be connected upstream of it.
It is essential to ensure that a blow-off line is led from the PRV to the outside. The ventilation opening or blow-off line must always be
must always be open, otherwise the OPSO will lock due to pressure increase.

IMPORTANT ! – Only use proper tools for assembly. – Prevent sealants from getting into the gas-carrying components. – Always counteract threaded connections with suitable keys. – After assembly, a careful leak test must be carried out.

D. START-UP
Start-up is carried out by slowly opening the extraction valve on the liquid gas container.
If the OPSO has locked, the following steps are required: